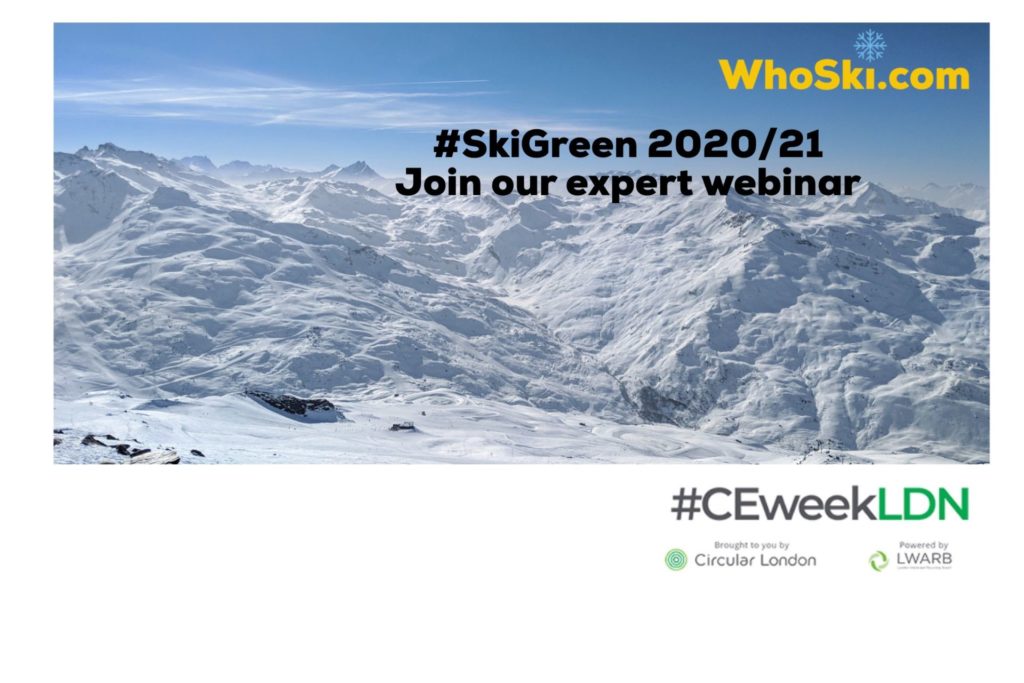 We’ve gathered some of the leading voices in the UK’s eco ski movement to discuss in a free-access online seminar how we can ALL take actions to ski a bit greener once the slopes re-open for season 2020/21.

From the clothes we wear, the way we travel and how we maintain our kit, to the changes being made by resorts – our expert panel of ski businesses and lobbyists will be highlighting the ways we as consumers can take positive action to reduce our impact and help protect the mountains we love to visit.

Our webinar (11am-12 noon on Friday June 5, 2020) will help you understand more about where the issues lie and how small things can make a big difference. Plus you’ll take away some easy-to-implement top tips on how to ski greener next season.

The event is part of a programme of seminars organised to mark this year’s ‘virtual’ CE Week London, with subjects ranging from fashion to building, finance to babies. The WhoSki.com panel will be promoting the broad #SkiGreen agenda.

Our webinar brings you a series of snappy, enlightening presentations from our expert panellists, followed by a Q&A session. Please feel free to submit questions in advance to info@whoski.com or ask questions during the #CEWeekLDN event (register for FREE to watch/listen and take part).

We’ll be outlining the ways in which skiers and snowboarders can reduce their impact on the environment before, during and after a trip to the slopes, including their wardrobe, travel options, destinations and actions while on the piste. The circular economy, recycling and sustainability are all key.

Sally Warren and Nicola Davenport : Co-founders, WhoSki.com
Textiles, the circular economy and the impact of wintersports wear on the environment.

Jim Stewart: Founder and MD, BUTTA eco ski/board wax
Keeping fluorocarbons off the piste: how one small thing can have a big impact.

Daniel Elkan: Founder of SnowCarbon, and sustainable travel journalist
How easy it is to get the train to the slopes, and overcoming travel obstacles.

Iain Martin: Founder of Ski Flight Free and presenter of the Ski Podcast
How attitudes and behaviours towards the environment from a younger generation have started to influence consumers and the ski industry.

Rachel Westbrook: Founder of EcoSki clothing brand
How buying new wintersports wear from the right sources is a crucial cog in the circular economy.

JOIN US: 11am on Friday June 5, 2020. FREE registration via Eventbrite
SPREAD THE WORD: #WhoSki #SkiGreen #CEWeekLDN

Our thanks to Sustainable Merton for supporting this webinar event.

1 Avoid flying to the mountains

According to train travel to the slopes website SnowCarbon, 73% of a ski resort’s carbon emissions emanate from the method of transport used by visitors. Swapping to train will cut up to 90% of the CO₂ versus flying there, they say.
Switching from plane to train is not only the most eco-friendly way to travel, but also the most civilised. You will know this if you have ever taken the snow train rather than fought your way through Geneva or Chambery airports, or driven the 1000 km across France to the Alps (at the same time as thousands of others).
The SkiFlightFree.org website cites figures from sustainability consultancy Antithesis Group that indicate flying to the Alps generates 6-7 times as much carbon as travelling by train:

If you’re travelling at half term, a family of four is likely to spend 50% less on the train then flying. The car journey will be even cheaper, even after you’ve factored in the Eurotunnel crossing, an overnight stop and fuel.

TIP: if you are planning to swap plane for train, book early as key dates sell out fast.

Every time you wash your ski clothing, it releases microplastics that wash through the drains into our rivers and oceans putting marine life at risk. Polyester is a major culprit.

Avoid washing it unnecessarily, spot clean where and when needed rather than putting the whole item into the washing machine, and hang items up to air at the end of every day – and particularly at the end of your ski holiday. You may find that you can completely avoid putting jackets, pants and salopettes through the wash completely.

For polyester and other man-made fibre items that need laundering, use a product such as a Guppy bag, designed to catch any microfibres which shed during the washing process.

Some £140 million of unwanted clothing goes into landfill each year, according to the Waste and Resources Action Programme (WRAP). Not only this is a terrible waste, but it also means toxins from dumped clothing slowly leach into the earth, and thence also our waterways and oceans.

Synthetics, like those which comprise most of your ski and wintersports wardrobe, are among the worst offenders. Not only do they not biodegrade, but they also reply on petrochemical industries, ie fossil fuels, for their raw materials.

It is vital for the environment, therefore, that they remain in usage for as long as possible. Extending the lifetime of clothing items by just a few months leads to a reduction in the carbon footprint of every item. Passing on a no longer wanted/needed piece of ski or snowboard clothing to another wintersports enthusiast means you are helping cut clothing production levels, albeit in a small way. Your old is someone else’s new: this is the principle behind the circular economy in fashion.

And that is, of course, why WhoSki.com exists. Support us – support the planet. Visit the WhoSki.com shop.

TIP: Always buy and sell kids’ ski clothing secondhand. It is generally good as new and costs a fraction of the price.